Oxford Brookes University consists of four campus sites and is currently  undergoing plans to significantly improve its estate over a 10-year period.

The university had installed a new wayfinding solution for its landmark John Henry Brookes Building at the primary campus in Headington, Oxford. However, the wayfinding was not improving navigation as hoped; in fact it was creating confusion.

The university asked us to revisit the wayfinding strategy for the building and develop a solution that better addressed the navigational challenges of the site.

We addressed naming, usage patterns, routing, and the style to deliver a scheme that was adaptable to different buildings, helped the wayfinding journey, and was consistent and effective.

As a result of poorly implemented wayfinding, the university had seen how important it is to do well. At their request, we created a strategy that was capable of rolling out across the whole estate in future phases. 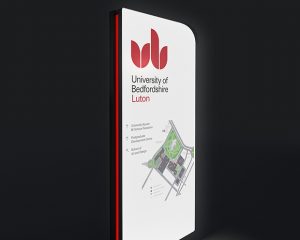 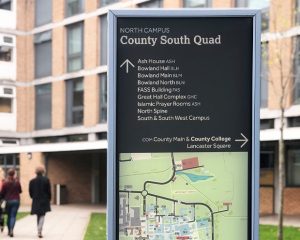