For many of us we last studied the Highway Code when we took our driving test and we’ve barely looked at it since.

It turns out, in fact, it’s constantly being updated. Often in small ways and sometimes in big ways. In January it was the subject of a relatively major overhaul, when over 50 new or updated rules were brought into force.

The reason for these changes? In a nutshell, to improve the safety of pedestrians and cyclists (and those riding horses, lest we forget).

A change in priority

The concept of a hierarchy of road users has been introduced into the Highway Code, with the objective of protecting our most vulnerable users. All road users are in the hierarchy, with those most at risk in the event of a collision (that’s pedestrians and in particular, children, older adults and disable people) sitting pretty at the top.

And at the bottom? It’s drivers of large vehicles, closely followed by vans/minibuses, car/taxis, and then motorcycles.

Together with cyclists, pedestrians have the priority over vehicles at junctions. Other users must give way to allow them to cross, pull out and make turns. Where a pedestrian is waiting to cross a road at a junction and a car is turning into the junction, the car must give way to the pedestrian.

Protecting the most vulnerable users

You don’t need to tell us (or anyone who’s walked along a busy road) just how vulnerable you feel as a pedestrian. Yet, whilst it might seem obvious, there has been no requirement up until now that cars and other vehicles would give way to the more vulnerable. Urban designers have, for a long time, used design interventions to take away priority from cars and hand it to pedestrians. Whether that’s through physically segregating people and cars (like Kings Cross Central, “a traffic-free oasis in the heart of London”) or, conversely, following the Home Zone or “woonerf” concept, taking out physical barriers to create shared spaces that psychologically require lower speeds.

Design has led the way in shifting the priority away from vehicles to make pedestrians feel safe, and in turn creating more active, walkable neighbourhoods. Now, the legislation is following suit, and not before time.

All the key changes to the code follow the same overarching objective: to make our streets safer for the most vulnerable users. Whether it’s leaving sufficient space to overtake, prohibiting overtaking on roundabouts or adopting the intriguing “Dutch Reach” technique when opening your car door, the Highway Code is clear:

All users must actively take steps to protect the most vulnerable users on our streets.

How should these changes make a difference to placemaking?

But why are we talking about this? What has this got to do with wayfinding?

The changes reinforce two important principles that underpin our work:

The best places are walkable

A core part of our belief is that places should be walkable. A 15-minute neighbourhood provides all essential shops and services within a 15 minute walk from your home. It’s a concept that has quickly grown in popularity in response to sprawling cities and an overreliance on cars. In this neighbourhood, you shouldn’t need to drive and will therefore choose, nine times out of 10, not to.

But beyond having the right shops and services within a walkable distance, a town centre or neighbourhood needs to be laid out in a way that is easily navigable and – importantly – safe and enjoyable to walk around. You could have the clearest signage in the world, but if it’s positioned on an unpleasant and downright dangerous walking route, it isn’t going to get read by anyone. In town centres like Oxford, walking is king. Places like Oxford, that carve out pedestrianised areas, create the right atmosphere to encourage even more visitors. Our wayfinding interventions in town centres work alongside urban design interventions to encourage visitors to choose pedestrian-friendly routes.

And it’s not just our town centres. Housing schemes, like at Berewood, have been designed from the outset to encourage walking and cycling. By laying out development parcels in a certain way we can discourage car dominance and make it easier for people to choose walking.

In 2019, as many journeys were made by bike as on Greater Manchester’s Metrolink tram system in 2019. Even with notoriously busy and dangerous roads – incomplete cycle provision – people are choosing to cycle.

This is hugely encouraging and shows the appetite is there to embrace this active mode of travel for our daily commute.

But still, there remain barriers to cycling and many are still put off. How do we encourage more to get out of their cars and onto their bikes? Alongside changes to the Highway Code hierarchy, cyclists need physical interventions such as segregated cycle lanes and smooth surfaces to make journeys more appealing and also digital interventions that put information and control in the hands of the user.

As creatives at heart, we naturally focus on the design interventions that encourage vibrancy and help to create places people love to spend time.

But what’s also needed is top-down intervention in the form of policies and laws.

Experts have known what good design looks like in this context for a long time. Whether we’re designing places from scratch, like urban extensions, or retrofitting pedestrian-safe spaces within the existing built form, the industry knows that to create vibrant spaces that people want to spend time we must take the car out of the equation or, at the very least, reduce its dominance.

By asserting a new hierarchy of priority between people and cars, the Highway Code is helping to reinforce this important aspect of vibrant, healthy places, where people want to stay a little longer.

It’s a reflection of what placemakers have been saying for some time: reduce the dominance of the car, and we will encourage active travel which is so vital to the health of users, our places and our planet.

You can read more about the changes to the Highway Code at Gov.uk.

We love designing wayfinding strategies that encourage users to explore on foot. Get in touch and we’ll help you create welcoming places where visitors stay a little longer and explore a little further. 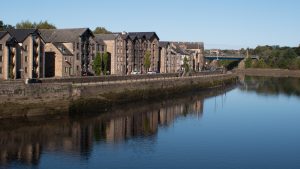 Wayfinding in a City that doesn’t sit still

Working to improve the wayfinding at Cressex Business Park, Buckinghamshire