What can designers learn from sheep? 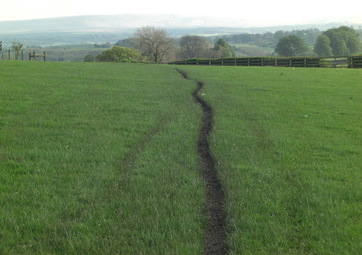 Finding your way along the sheep tracks

If you’ve ever observed sheep walking across a field, you’ll know they tend to follow one another in line. So much so that even if there’s a blockage ahead, they’ll often still wait in line. If they do get impatient and overtake, they return to the well-trodden path to continue on their way. They want to take the most direct path to get to where they want to be. Well, who wouldn’t?

We’re not suggesting for a minute that people are sheep but when we’re solely focused on where we want to go we, too, will choose the shortest route we can to get there. And if that means going off-road or cutting a corner, then so be it. It’s a kind of cognitive connectivity. In the urban design world, it’s known as ‘desire lines’. Understanding users’ desire lines before designing in the paths is a key element of user-centred design.

What happens when designers forget the users?

Sometimes, however, urban designs end up being designer-centred rather than user-centred. Take Piccadilly Gardens in Manchester. We’ll use this example because it’s in our city and we can’t wait to get back into the office.

The largest open space in the city centre was redesigned in 2002 by Japan’s Tadao Ando, whose architectural style takes influences from haiku, Zen and nature. But it wasn’t long before the people of Manchester were questioning whether a Japanese-inspired urban garden with “inner meaning” was the right design solution.

The trouble with basing a design concept on abstract “big” ideas, however admirable, is that if it doesn’t fundamentally understand the users’ needs, it won’t stand the test of time.

Much has been said about Ando’s design, and that debate continues. But one thing is clear: Piccadilly Gardens is busy and chaotic and has suffered from heavy footfall. Because the paths don’t reflect users’ desire lines, we have made our own well-trodden paths to take the more direct route. The constant wearing of the grass is an indication that user-centred wayfinding did not feature heavily in the design process.

There is a better way

At Placemarque, long before we do any designing, we focus on getting to understand a place. Not simply to orient ourselves with where the key destinations are, but to understand how users perceive and experience a place, and where the natural desire lines are for those who visit, live and work there.

At the heart of what we do, is user experience.

It’s a bottom up rather than top down approach. Our wayfinding audits identify the most commonly-used routes as well as those that are more hidden – known to “explorers” or those with local knowledge – whether these follow formal routes or shortcuts. We’re often surprised.


And it’s collaborative, too. We conduct stakeholder engagement to understand the perspectives of the different users – whether that’s with university staff and students, visitors or delivery drivers.


This user-first approach works best in tandem with the wider design team. New spaces are an opportunity to start from the right point: with users at the centre. From this point we can help people connect. Connect with their destination and connect with the space.


So, we look forward with anticipation to LDA Manchester’s plans for Piccadilly Gardens. A new start brings a new opportunity to put users at the centre, and to encourage visitors to explore, linger and connect.

30.03.2021
Sophie Campbell
We use cookies on our website to give you the most relevant experience by remembering your preferences and repeat visits. By clicking “Accept All”, you consent to the use of ALL the cookies. However, you may visit "Cookie Settings" to provide a controlled consent.
Cookie SettingsAccept All
Manage consent

This website uses cookies to improve your experience while you navigate through the website. Out of these, the cookies that are categorized as necessary are stored on your browser as they are essential for the working of basic functionalities of the website. We also use third-party cookies that help us analyze and understand how you use this website. These cookies will be stored in your browser only with your consent. You also have the option to opt-out of these cookies. But opting out of some of these cookies may affect your browsing experience.
Necessary Always Enabled

Performance cookies are used to understand and analyze the key performance indexes of the website which helps in delivering a better user experience for the visitors.

Analytical cookies are used to understand how visitors interact with the website. These cookies help provide information on metrics the number of visitors, bounce rate, traffic source, etc.

Advertisement cookies are used to provide visitors with relevant ads and marketing campaigns. These cookies track visitors across websites and collect information to provide customized ads.

Other uncategorized cookies are those that are being analyzed and have not been classified into a category as yet.